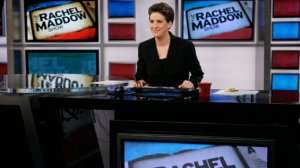 This is Rachel Maddow; I love her; I also don’t watch her show any more

Several years ago, when she was battling clinical depression, my partner Sami stopped following the news.

She couldn’t deal with it.  When you’re struggling to get out of bed every day, along with dealing with the fact that your partner is 1700 miles away due to his job, and you have to take care of your two special needs kids all on your lonesome, following the “if it bleeds it leads” news was just too much.

I understood her perspective, but felt that one of us needed to keep up.  I used to watch “Countdown” (when it was still on) and “The Rachel Maddow Show” as podcasts, and those along with Jon Stewart, my Twitter feed, and the other stuff that I read online kept me abreast of what’s happening.

But you know what?  Over time, it was honestly just too much.  We’re still in Afghanistan.  Obama is still violating people’s civil rights.  Warrantless wiretapping is still happening.  Gitmo is still open.  The Congress and the “Very Serious People” in Washington still seem to be determined to give rich folks more money and take it from the rest of us, cutting medicate, medicaid, social security, food stamps, and anything else that they can think of (so long as it doesn’t effect them).  Hurricanes, tornadoes, whackos going on shooting sprees; it just never stops, does it?

So I stopped following the news.

I still click on the occasional article link in my Twitter feed–which I have severely edited to not include a ton of “news” tweets.  I still surf on over to Salon.com every once in a while.  But for the most part, no more.  I stopped listening to the Rachel Maddow podcasts and now listen to “The Bugle” and “Geek’s Guide to the Galaxy” and “Star Talk Radio” (with Neil DeGrasse Tyson) instead.  I listen to a lot of audio books–right now I’m giving the first book in the Jack Aubrey/Stephen Maturin series a try.  I just finished “A Canticle for Leibowitz” and “Cryptomonicon”.  Next I might try “Lonesome Dove”.  I dunno, but it’s a whole lot more soothing than listening to yet another Rachel Maddow show where she talks about how we’re still at war in Afghanistan and how Republicans are still blocking any and every bill in the Senate and how Republicans in the House are voting again against Obamacare and how a series of tornadoes just destroyed half of Oklahoma.  Or whatever.

Maybe I’m a wimp.  I dunno.  All I know is that I’m lot less tense lately.  And somehow I still seem to function in the larger society without all that News o’ the World weighing me down.

Now if you’ll excuse me, it’s time to get back to blocking my next story.