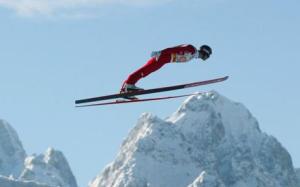 Image courtesy of The Telegraph

The Olympics are on.

I love the Winter Olympics, honestly. Sami and I enjoy watching the figure skating together and regaling each other with our (in my case) half-informed opinions on various skaters, techniques, and move difficulties. I have loved the downhill ever since Franz Klammer’s utterly-insane, gold medal, death-defying final run in Innsbruck in 1976, something that literally took my breath away. I love watching the ski jumping, the men (and now finally women!) flying hundreds of feed down the hill, drifting, drifting, seemingly hanging up there forever. The bobsledders, lugers, and nutty skeleton riders, barreling down the hill inches above the ice at speeds that make me nervous when I’m surrounded by more than a ton of metal and plastic. I really love it.

And I would love to watch it. Except that the network that has a monopoly on all the content–NBC in this case–is completely and utterly against people in my minority group.

No, not Jews. Not nerds either, although there is definitely some overlap there. That group is cable-cutters.

Cable-cutters are folks who gave up on cable or satellite subscriptions, and the networks (especially folks like HBO) absolutely hate us. Or at least that’s the way it appears to us, given their behavior. You see, while most shows are available via Amazon Prime or iTunes or other avenues, “special” content–anything HBO puts out, or Big Events like the Stanley Cup or World Series or, yes, the Olympics–are only available if you sign up on an app, and the only way to sign up on that app is . . . to have a cable or satellite account.

Yup, that’s right gang: If you want to watch “Game of Thrones” or the Olympics on your iPad, you are required to have a cable TV account.

Cable and satellite companies hate and fear families like ours. The way cable companies make money is to force you to buy big packages of content, subsidizing all those channels you never watch by making you pay a premium for the stuff you really want. “A la carte” cable packages are anathema to these people; if you could only pick and choose the 5-10 channels you want, they would lose leverage, money, prime deals with various networks, and I don’t know what else. They don’t want that; they want to continue their monopoly on your content by forcing you to watch what they want to sell you, their way. And people like us are a threat to that model.

And yet just like media companies when the VCR first came out, then DVDs, and then digital content, they’re missing the boat. There are millions of us out there now, consuming our video content from out Macbooks or iPads or Android smartphones, and they are writing us–and millions of potential dollars–off their books entirely. Leaving money on the table. And for a lot of people, forcing them to choose between bad options–buying a cable package you don’t want, waiting months or years to get content that is available for everyone else, or pirating it. And as you might guess, by pulling this nonsense, while blatting on about piracy and how much it’s costing them, the media companies are causing many people to choose that over waiting or signing up for cable accounts. It turns out, unsurprisingly, that when folks are pushed into a corner and forced, they don’t like it and lash out. Not very shocking. (The Oatmeal sums up this dilemma quite well.)

I want to watch the Olympics. I am fine with paying for the content; I don’t even mind watching it the way folks watching broadcast TV have to–with endless commercials, blathering analysis by former athletes, and a flood of “up close and personal” clips. But no, that’s not an option. I can either get a cable account (for two weeks of content), go to the local bar or whatever, or pirate it. And for any of those choices, my dollars are left on the table and NBC doesn’t get them.

We are nearly 20 years into the web era, media companies, and a good half-dozen deep into the streaming era. Companies like Netflix are producing shows for people to binge-watch. And you are still trying to force folks to sign up for cable or satellite contracts? Pull yourselves into the future and figure it out, or you’re going to be left behind.