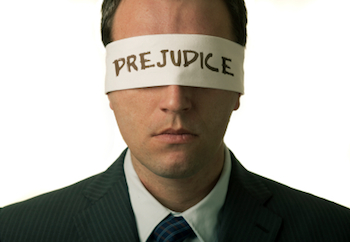 Recently one of the transgender Twitter accounts I follow pointed me to a post by NPR about the discrimination that trans folks face in the workplace.  The gist of the post (and associated NPR audio piece) is that it really helps, especially when transitioning (i.e., transitioning from one gender to another), to have allies at your workplace.  And there’s some information as well about the discrimination trans folks face on a regular basis.  (As well as some pretty scary statistics about suicide rates for trans folks—statistics that I believe should shut up any transgender-exclusionary radical feminists, that is radical feminists who believe that it’s okay to exclude trans men/women from men/women-only spaces, but I’m sure won’t.  But that’s a topic for another day.)

It got me thinking that while trans folks face a terrible burden, there are other discriminations in the workplace (some of which I’ve written about), all of which are blatantly and profoundly stupid.

See, here’s the thing:  In high tech, it’s hard to find the right people for the job.  Really hard, honestly.  Yes, there are plenty of good programmers out there, plenty of good QA people, marketing people, technical writers, etc.  Sure.  But it’s not just a matter of people having the right raw materials for the job; they also need to have the right level of experience—sometimes you want that person with 25 years of experience, and sometimes you want someone fresh out of college—the right set of skills, an ability to work in the types of groups you have at your company, a track record of accomplishments in the appropriate areas, etc. etc. etc.  Not to mention someone who can add to your group’s dynamic; for example, if you have a bunch of really shy people on your team, maybe you need someone more extroverted.  Or maybe you work at a company where everyone is expected to work very independently, and so that experience you’ve had as a manager is important.  Whatever.

(Yes, I acknowledge that this can lead you straight down that slippery slope of only hiring white folks because you only “feel comfortable” with your “type of people”.  That’s not where I’m going with this.  In fact, I’m going in the completely opposite direction.  I just want to note that there are other factors besides raw experience that come into the hiring mix.  And so no, I tell you three times and what I tell you three times is true:  It is NOT okay to use “they have to fit in with the group” to excuse bigotry.  Not okay, not okay, not okay!)

So in this situation, I am constantly puzzled by people discriminating against potential hires because they are transgender.  Or women.  Or Asian or of African descent or from South America.  Or who speak English with (to my ear) funny accents.  Or who are gay or lesbian or bi.  It’s hard enough to find good people; ruling people out just because they sleep with people of the same gender or hail from Kerala instead of Colorado strikes me as self-defeating.

And specifically when it comes to transgender folks who transition while they’re in the job, it makes even less sense.  This is a person you’ve worked with, established a relationship with, whose strengths and “areas for development” (corporate-speak for “weaknesses”) you’re familiar with;  why should you give a damn if you find out that, “oh my heavens, his father is actually a black guy!”?  What does it matter if they worship God on Saturday morning in Hebrew rather than Sunday morning in Latin or English?  Who cares if Adam sleeps with Steve, as long as Adam continues to deliver code?  Does it make a difference that Ashok is sometimes hard to understand (when my wife has trouble understanding my Aunt Maureen from Boston) when he’s completing projects like a madman?  Why should you give a crap that you report to Deanna instead of Douglas as long as Deanna is a good boss?  What the heck difference does it make if Mark transitions to Margaret so long as they continue to crank out work?  I find it insane.

I will say this in defense of high tech:  I’ve met many, many, many bigoted people over the years who suck it up and deal and get along just fine with folks they’re bigoted against, when those folks are delivering.  (When they don’t, yes, it can get ugly.)  I can’t relay to you how many times I’ve had conversations with people along these lines:

Yes, we have to move to a place where this conversation doesn’t even happen because CoWorker realizes, like I state above, it doesn’t matter.

A couple of other points to consider when thinking about this stuff:  As the world grows more interconnected (especially in high tech), you’re going to find yourself working for people who are not native Americans, or not white, or not straight, or not Christian, or not cisgender, or not [enter minority here].  And when (not “if”!) you do, how well do you think your bigotry is going to fly with them, hm?

Something else to consider is the extension of the workspace from “everyone come into the office” (which I’ll post about soon) to “distributed teams”, i.e. teams where people are spread out all over the country, or the world.  On such a team, are you going to discriminate against Yung just because she’s in Taiwan, or Ivanov because he’s in Ukraine?  Not only would that be self-defeating, it’s genuinely silly.

In movies (and sometimes real life), people say, “It’s only business”.  Now I personally don’t like this saying; too often it’s used by someone who just has, is about to, royally screw someone (or groups of someones) over.  (“Yes, we’re laying you all off, but it’s only business.”  Yeah, tell that to my mortgage company, you jerkweed.)  This is the corollary; if it’s only business, then the only thing that matters is what happens on the clock for the company, and if they’re getting the job done who cares if someone was hired wearing slacks and T-shirts and is now coming to work in heels and a skirt-and-blouse combo?

So stop discriminating, people; you’re not just hurting other folks, you’re hurting yourself and your business.  Knock it off!