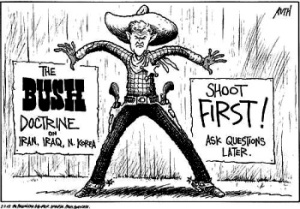 I like to read right before I go to bed.  I’m finding that, in this age where you can find almost any type of information online, I often queue up topics for later study while I’m watching a movie or a TV show on my iPhone or iPad.  So for example, last night I was watching Kurt Russell and Val Kilmer in “Tombstone”, and it got me reading about Wyatt Earp and Bat Masterson and the Old West in general as my pre-bed reading.

And in that mode, for some reason this morning I looked up the Powell Doctrine (which is a very restrained foreign policy in most respects, and which I was startled to find was based on a policy articulated originally by Casper Weinberger, who I also regarded as a dangerous lunatic who never met a weapons system he didn’t like).  Which led me to what is almost the diametric opposite of the Powell Doctrine:  The “Bush Doctrine”.  The Bush Doctrine is many things to many people, but I think most folks would agree that it has a couple of main components:  “Spreading democracy” (at gun-point, often) and “pre-emptive war” (i.e., “If we think you may eventually threaten us, or we think you’re harboring terrorists, we get to bomb your ass”).

And the more I read about pre-emptive war, the more it seemed like a national version of Florida’s “stand your ground” law.  The basics of the “stand your ground” law are that, if someone is threatening you, or you think someone is threatening you, you can take their ass out and expect to face no consequences.  George Zimmerman–the one in Florida, not the guy who sells suits in California–is the poster child for this.  He basically picked a fight with that poor kid and, when the kid (allegedly, though we’ll never know because he’s dead) started wailing on his ass, he shot him dead and got off scot free.

Which is almost exactly like Bush’s “pre-emptive war” doctrine, when you think about it.  “Saddam Hussein is a scary man who we think might have nasty weapons, so we’re going to shoot him dead!”  (I personally don’t see a whole lot of difference between this policy and the Pre-Crime unit in “Minority Report”, but then I’m a screaming lefty who has been worried about the police state for decades, so what do I know?  Oh, wait; we do have a police state now!  Guess us screaming lefties were right!)

Which makes sense, really.  I’ve long thought Republicans were simply bullies.  This was especially clear during the Bush years, when you had a bunch of bullies–Rumsfeld, Bush, Cheney, etc.–running the government.  And at heart, bullies are scared cowards, who bully out of fear.

I don’t have an answer, honestly, other than that the entire Republican party get some serious therapy, and maybe start mainlining Theanine.  But at the very least, we need to point out and keep pointing out their irrational fears, and do our best to stop their depraved march back to the 19th Century.  And hey, if you have any genius ideas, be sure to share them below!