Politicians basically do this when asked questions
Copyright the Bil Keane estate, all rights reserved, I’m sure

As a guy who grew up watching Ron Ziegler dance around Nixon’s lies, and has observed (usually with horror) how people like Scott McClellan, Dana Perino, and their ilk dissemble and outright lie to the press, it occurred to me that there is a one way to demand answers from politicians:

I have two kids.  Kids are past-masters at lying, deception, and attempts to change the subject.  The only way that I personally have found to consistently get information is to not allow myself to be distracted.  Like this:

And so on.  It’s a pain in the ass, yes, but eventually you find the culprit (granting that you are more stubborn than your kids which, in my case, is a good bet).

This is exactly how spokespeople, politicians, and their ilk should be treated.  They don’t want to answer the questions they are asked in a straight-forward way?  Fine; treat them like a 9 year-old.  Keep asking the same question.  Demand an answer to your first question.  And if the spokesperson or politician won’t answer?  Well, after 7 or 8 iterations of this, it will be obvious to all involved that they are dodging and lying, and their credibility will go down regardless.  Either they answer or they look like idiots; either one is fine by me.

And so on.  If these bozos want to act like 9 year-olds attempting to cover up the fact that they have been lighting fires in the back yard, then they should be treated the same way.  Heck, I would even put them “in their room” (and cut off all external access) until they admit what they’ve done.  It’ll be even funnier than those times politicians (and other jerk-wads, like Martin “let’s gouge people for AIDS medicine” Shkreli) keep repeating the same answer over and over, no matter the question.

I dunno; I guess I’m just feeling vindictive.  I’m pretty tired of the Cavalcade of Clowns we’re stuck with on the Republican side, any one of which would be a disaster if President, and any one of which may actually end up President.  As much as that horrifies and frightens me, it’s true.  As true as the fact that the Republicans—despite having a “brand” so eroded that no voters will actually admit they are Republican—are in control of the House and Senate.  (Go ahead; ask a random right-wing bloviator on Twitter or Tumblr or wherever if they’re a Republican.  It’s always “No.”  They’re “Libertarian”, or “Independent”, or whatever, even if they’ve never voted for anyone other than a Republican in their lives.) Which is plenty scary, too.

I’m not too thrilled with triangulation artist & “realist” Hillary Clinton, either, except that I know she’ll be better than anything the Republicans finally throw out there.

But for now, I’d settle for Meghan Kelly pinning down Trump or Rubio or Cruz and refusing to let up until she has an actual answer.  Say, on wars.

I’m not holding my breath, though. 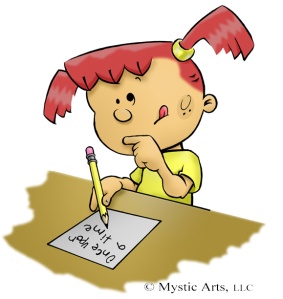 Image courtesy of The Chronicle of Higher Education

When I was a kid and grown-ups, as they almost invariably do, asked me what I wanted to be when I grew up I was (as my mother will tell you is my habit) rather blunt:  “I don’t know,” I would say.  I didn’t want to be an astronaut, though I wanted very much to go to the moon.  I didn’t want to be a doctor, or a lawyer, or a nurse.  I wanted to do something that had math in it, and science preferably, but what that was I really had no idea.  And I was quite up-front about it.  Which tended discombobulate a lot of adults.

As a result I would guess that it comes as no surprise that, even though I have been doing it for nearly a quarter of a century, I still find it difficult to come to grips with the fact that, yes, I am a writer.  Excuse me:  A Writer.  But the funny thing is that I am in a very weird, niche branch of writing called “tech writing” (about which I’ve blathered on about before), which most people have never heard of.  “I write computer manuals”, I explain, although that doesn’t even cover the half of it.  Especially now that I am a manager.

But yes, I am a writer.  I earn my daily bread by putting coherent English sentences down on metaphorical paper and making them available to the world.  But I am not a fiction writer, a literary writer, or a journalist (or even that bastard step-child of the fiction writing business:  A screenwriter), and thus people struggle with it when I tell them what I do.  And as you may guess, I struggle with it, too.

This came up for me again recently when I read another in a long line of Web posts on how the Web is making the business of being a writer so very difficult.  And I totally believe what Tim Kreider says in his article, just as I believe the very similar stories of many of my writer e-friends, particularly those who have tried to work with Huffington Post.  Being a writer now means the squeeze is on even more than ever to not get paid in exchange for “exposure”.  And as the saying goes, you can’t pay the rent of the electric bill with “exposure”.

But that’s the funny thing:  It’s different for tech writers.  On the down side, you are a wage slave to the tech industry, which is scary and uncertain in its very own ways.  But on the up side, high tech pays well.  Very well.  Writers don’t get paid anywhere near the scale of engineers, marketing folks, QA, or even IT, but tech writers still get paid well by the standards of white-collar pay.  Is it depressing to make less than a 27 year-old coder?  Absolutely.  But I still do a lot better than Mr. Kreider; my 25+ years in the industry is a huge asset in acquired knowledge, and companies like it.

Sure, a lot of companies have tried to offshore or out-source their tech writing.  Shipping it to India has been tried by any number of companies, and the results are generally pretty consistent:  Bad content that companies often have to hire native-English speakers to fix.  The ability to write graceful English sentences is difficult enough for those of us who grew up speaking it from the cradle; trying to do it as a second language is surpassingly difficult.  When you add in the additional complexity of requiring the ability to not only write well, concisely, and descriptively, but to also  have some understanding of and facility with high tech, the number of available candidates becomes pretty small.  And most of them don’t live in countries outside the English-speaking world.

(Nothing detracting from my Indian colleagues, but English is almost always their second language, and it is the rare writer for whom that doesn’t show.  How many translations of books from their original language have you read and been disappointed with?  Writing in one’s own language is hard; writing in your non-native language is really, really hard.)

And so I read pieces like Kreider’s and I squirm a bit, I must admit.  Because I am making a pretty good living at writing, even though it’s almost certainly not a type of writing that Kreider would necessarily think of as writing; it’s certainly not the type of writing he does and tries to get paid for.  And I have the luxury of writing fiction “in my spare time”, so if it doesn’t work out, or if folks don’t like it, that’s okay; it doesn’t effect the local ham&eggs issue.  When I worked for perqs and “exposure” for the tech review and news site Gear Diary, that was fine, because I really did do it for fun, and anything I got for it–free gear, tickets to SXSWi, free software to test–was a bonus for me.

But I want to be clear:  Even though I am not a “real” writer by many folks’ definition, I am firmly and absolutely committed to writers getting paid for their work, and completely support Kreider and other writers who demand it.   While tech writers, journalists, and fiction writers dance in very different circles, I think we all really do need to be dancing together on this one.