Seriously, I think the guy on the left looks pretty good
(Photo courtesy of The Conversation)

My Twitter feed is–how shall I say this?–eclectic. Some nerds talking coding, of course. Some writers. A (very) few celebrities–Stephen King, Alan Tudyk–some writers like David Brin and James Fallows, some marketing people, sex workers, GLBT folks, goofy ones like PourMoreCoffee, and of course a bunch of friends. The cool thing is that I get a lot of different topics coming in at me. And today one that rolled my way was about clothing, where a sex worker gave the business to a guy who asked, “Why do lesbians wear men’s clothes?”

Well, I’ve been wondering something similar for a long time, but from a completely different angle. I was lucky enough to spend a huge percent of my life in California, where the climate is very mild. Even more, I was in Santa Cruz for 12 years, where the fog off the Monterey Bay keeps the hot air from the Central Valley from killing us every summer.

But even in Santa Cruz–and without any question now I’m in Texas–it can get hot, and make you wish you had a wider variety of clothing options.  So for example, when I was working in the cafeteria on a hot day, I would watch the women in their light cotton skirts and think, “Man, why can’t I wear something like that?  A kilt, say?  What’s the problem?”  And the problem is, it was against the “dress code”.  Men were required to wear long pants “on duty”.

This was similar when I went to work as a security guard; there were very strict requirements for what one could wear on duty, said requirements being tightly defined to established gender roles.  So that, for example, when my supervisor saw my earring, he immediately ordered me to take it off.  (After combing through the regulations, I found nothing that said men couldn’t wear earrings; there was only a note–obviously directed at female employees but not worded specifically to indicate this–that you couldn’t wear dangly earrings while on duty.  As I was wearing a stud I was prepared to argue, but not prepared enough to get fired.  But that’s another story.)

This not only offends my sense of equality, as an ally of transgender rights it irks me.  My trans friends want to wear what they want to wear, and get endless flack for it.  What could help more than the normalizing of “cross-dressing” by the rest of the population, much as “lesbians wear man clothes”?  My first girlfriend, who was very slender, liked to wear overalls.  Another very curvy one liked jeans (which looked great on her).  And who cared?  No one!  And from the purely selfish, comfort standpoint of a guy who is sick of being overheated in the summer, if a woman can wear pants, why can’t a guy wear a cotton skirt? (Or silk? Or hell, organdy for all of me?)

Besides, from the aesthetic standpoint, there are plenty of guys who would probably look much better in a skirt.  I mean, there are loads of guys out there with nice legs; why not give the folks who want to gawp at male gams the chance, huh?  And I have to think that all those flat-butted middle-aged guys would look a lot better in a nicely-tailored skirt than in those relaxed-fit Gap-for-man khakis, don’t you think?  Add some pockets to a skirt, some belt loops, and why not? 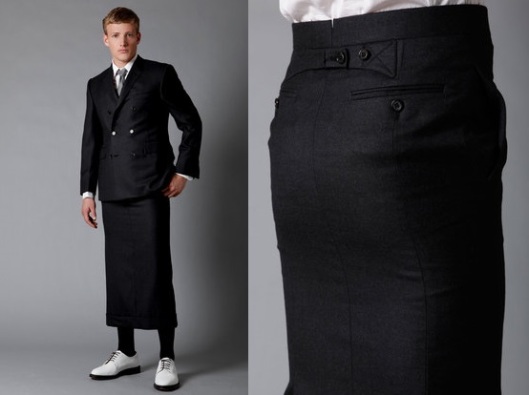 So without making too fine a point of it the question is:  Why shouldn’t anyone wear jeans and T-shirts who wants to but, even more, why can’t men wear skirts on hot days?  Not kilts; I have a kilt, and while I quite like it the damn things are amazingly heavy and make you sweat like a demon around the waist on a hot day.  No, I’m talking light cotton skirts here.  If Harry Potter can wear Dress Robes, and Cornelius fudge pin-striped robes to work, why can’t we design a lighter kilt-like garment, or a skirt that “looks masculine” so that it’s okay for guys to wear it?  The skirt equivalent of a pin-striped, double-breasted jacket?  Why not?  The Romans and Greeks wore dresses, for pete’s sake!

* Special thanks to Dominique for providing me with the idea for the post. Thanks, Dominique! (God I love my Twitter feed.)