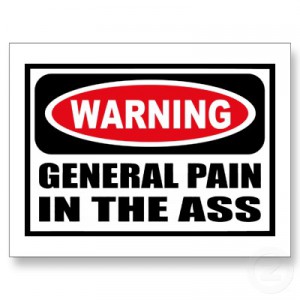 OK, yes: I should be flogged for such a bad pun.  I beg forgiveness.

I’m in high tech, and in high tech we love our acronyms.  We love them so much, we even have an acronym for them:  TLAs, or “three-letter acronyms”.  Sometimes you get longer ones, but often they’re three letters.  But in this case we have a four-letter acronym: PITA.  “Pain in the ass”.  And I want to share a theory with y’all about why certain things get adopted by the public and world at large, and other things don’t.  I call this The PITA Principle.

The PITA Principle is simple:  The more of a pain in the ass something is to do, the less likely people will do it.  This seems obvious, right?  But the thing is, when you look at a lot of things that seem confusing from a rational perspective–why don’t people buy electric cars more often?–it’s because of The PITA Principle.  Having an electric car is more of a PITA than a gasoline car.  The world infrastructure is designed around gas cars that can be refueled in a few minutes, every 300 miles or so.  Gas stations are distributed accordingly.  People plan their trips based on this.  Their subconscious expectations are all geared towards it.  So why would you switch from something that goes 350 miles on a single refueling, said refueling taking less than 5 minutes, to something that goes less than 100 miles on a single charge, and recharging takes hours?  Even if doing so is cheaper, and more environmentally sound?  The PITA Principle, baby; it’s easier.  I think it’s that simple.

This explains the adoption of a ton of things that might–especially to curmudgeons–seem weird.  Why email rather than physical mail?  It’s easier!  The PITA Principle!  You can email in seconds, from your laptop, wherever you are; to mail something physical requires stamps and envelopes and licking and walking to the mailbox and paying money.  It’s not much of a PITA, but it’s more of one than sending email.

Which also explains why teens text so durn much; it’s even less of a PITA than email.  And furthermore, it’s less of a PITA (for a teen) than talking on the very same phone!  “Why?” you might reasonably ask.  Because when you talk on the phone, you have to be in a location with a reasonable amount of privacy, as does your calling partner; you have to deal with the emotional content of their voice, and correspondingly control your own vocal dynamics; you have to hang up or put the person on hold if interrupted, and so do they; and on and on.  It’s more of a PITA.  Texting is easier.  Teens text.

Or move on over into the political realm.  Despite the fact that the Republicans’ platform is out of step with more than 2/3 of the country (seriously; look it up), they continue to be competitive, are in charge of the House of Representatives, numerous states, may grab the Senate, and continue to be competitive in Presidential elections.  How is that possible?  Democrats far outnumber Republicans; Democratic positions (raise the minimum wage; increase Medicare and Medicaid coverage; improve Social Security; get government out of doctor/patient decisions; etc.) are wildly popular compared to Republican positions.  How do they keep winning?  Yes, incumbency; yes, Gerrymandering; yes, cheating.  But I also believe the PITA Principle plays a big role.  What’s easier?  Voting for the guy (or woman) who you’re familiar with, whose name you know, who you are used to.  “The Devil you know.”  The PITA point is lower.  Incumbents win because voting for them is easier.  The PITA Principle.

This is reflected in a lot of high tech success stories.  Not all, but some.  Why did Apple sell a b’zillion iPods, when there were so many other MP3 players out there?  Because by browbeating record companies and artists and publishers and making iTunes pricing very consistent, and making the downloading process easier and simpler than the competitors, Jobs lowered the PITA factor to a point where it was significantly better than his competitors, and thus won the market.  Why do people still buy more iPhones than Android phones?  Lower PITA point.  (Though Android is now very, very close, and in some ways better.)  Why do iPads continue to outsell other tablets?  The PITA point, which not only takes in the tablets themselves, but how they interact with iTunes, your computer (particularly if you’re using a Mac desktop or laptop), and the other iPads, iPhones, and Macs in your home.  Apple’s products, in the main, have extremely low PITA points, and they charge accordingly.

You can also see this, very much, in a business environment.  For example, at a previous job at [formerly awesome company that no longer exists], one team was performing software source control using a very sophisticated, graphical interface tool, while another team used a very rough-and-ready, command-line tool for their source control.  The graphical tool was more powerful, more technically sophisticated, did a better job and ensuring source security, was superior at preventing source collisions and workflow errors . . . and people hated it, and we all eventually moved back to the command-line tool, kludgy though it was.  Why?  The graphical tool was way more of a PITA to use and maintain, and the command-line tool was simpler and easier to use (and easier to spoof when something went wrong, too).  The lower PITA point won out, even though the company was actually selling the graphical tool!  A lower PITA point buys you a lot.

I’m sure someone smarter than me, with better math, economic, sociological, and business knowledge, would be able to put together charts, graphs, figures, and PowerPoint slides to make this into a true scientific study.  I’m sure there’s some kind of way to enumerate PITA values for particular products or processes, and correlate PITA points to prices and profit margins, but I’m not that guy.  John Nash could probably do it and win another Nobel Prize.  But I’m just a humble writer.  A humble writer who sincerely hopes someone smarter does take up this gauntlet, and see where it goes.