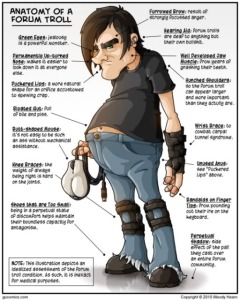 photo courtesy of BeWytch Me

I’ve been online since, believe it or not, 1982.  Yes, the Internet existed then, but it was tiny, and primarily limited to universities and military or government installations.  And as luck would have it, my career in high tech has almost completely coincided with the exponential expansion of the Internet, the birth and explosive growth of the Web, and the penetration of computers into basically every home and practically every pocket.  So I have a little bit of perspective of things of an online nature.  I’m not an expert by any means; I haven’t studied it.  But I do have more than 30 years of experience in it.  For whatever that is worth.

I mention this to provide a little context for my observations about trolls.  I was thinking about this recently after reading an interesting article in Slate that cited a scientific study of trolls and trolling.  The gist is, bluntly, exactly what Slate’s title notes:  Trolls are awful people.  I had always wondered what kind of personality got actual pleasure from pissing off complete strangers, starting online fights (and then leaving them), creating havoc, and engaging in this kind of anti-social behavior.  Your assumption is that they are dicks.  And now the evidence is in, and it tells us:  Yup, they’re utter douche-bags.

And here’s the thing: They’ve always been around.  Even when I was on a university forum (text-only, limited to students and faculty), people would troll just to be obnoxious jerks.  And about the same thing that people troll about now:  Abortion, homosexuality, politics, sexism, racism, and the like.  The same damn things.  The only big difference now seems to be that more people have access, so there are more trolls.  But they’re still jumping in their with their homophobic polemics or whatever to stir people up.  It’s predictable.

And because it’s predictable, in my standard bury-the-lede style, I thought I’d outline a few common behaviors over the years to help you spot trolls sooner, and so maybe avoid some personal aggravation.  Also, I’m procrastinating on working on my novel.

So there you have it.  You see these behaviors, you have yourself a troll, and you shouldn’t bother responding to them because–to repeat–all they want to do is piss you off.  If they succeed, they’re happy.  If you ignore them, that makes them mad.  I know which option I prefer; how about you?